In an age on e-communication, Bhim Bahadur Tamang still makes the once-a-week stop at the Sherathang border post to exchange mail with his Chinese counterpart, an exercise that has persisted through the years. 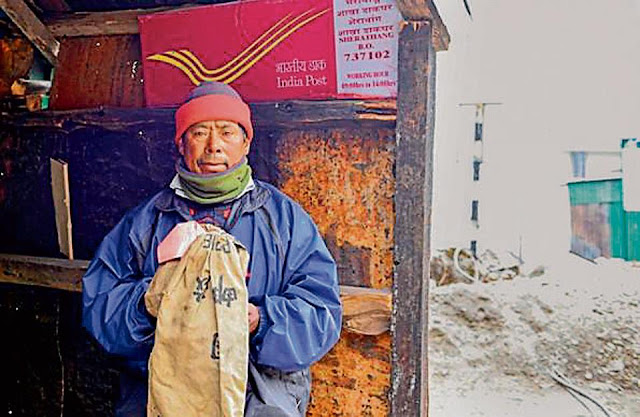 Postman Bhim Bahadur Tamang at the Sherathang border post. Tamang trudges through snow once a week to deliver mail across the Nathu La pass in Sikkim.(Wang Chen)
Bhim Bahadur Tamang is a diminutive man who has been a postman for more than 25 years, an increasingly thankless job in a world of digital communication.
But for three minutes every Thursday morning, the 61-year-old acts as the bridge between India and China as he trudges through metres of snow at 14,000 feet to deliver mail across the mountainous border pass of Nathu La in Sikkim.
Dressed usually in a windcheater jacket with a cap protecting his ears and head in temperatures that drop to -20 degrees in winter, Tamang crosses the barbed wire fence marking the Indian border at 8:30am, and enters a shed on the Chinese side, not illegally, but with the official sanction of both nations.
As Indian and Chinese troops and their artillery are stationed eyeball-to-eyeball outside, inside the shed mailbags are exchanged between Tamang and his Chinese counterpart without a word being spoken.
“It is a very short process,” Tamang, a postal departmental employee, tells Hindustan Times sitting at the Sherethang border post office ringed by snow-capped mountains on all sides.
“We just exchange bags, sign the mail manifest and leave the shed. There is no conversation whatsoever — I speak Nepali and Hindi, my Chinese friend follows neither.”
An Indo-Chinese agreement in 1992 formally recognised the exchange of mail through the famous Nathu La Pass border post, about 55 km from Sikkim’s capital Gangtok.
The mail exchange is never postponed or stopped, even at the height of tensions between the two Asian neighbours over festering border disputes, says Tamang who took over in 1991 from a predecessor who once carried the mail for Sikkim’s erstwhile monarchs, the Chogyal.
Tough to replace
Nathu La grabbed national headlines after a skirmish between the Indian and Chinese troops during the Chinese aggression on the border state in 1967. Even today, the post is zealously guarded by the army.
Tamang lives in east Sikkim’s Sherathang village, about 7 km from the border. The weather here is fickle, and even in summer a thin film of freezing mist descends across the peaks, making it hard to see anything. Tamang’s village is one of the few that dot the area’s craggy landscape, a terrain so tough that not many people would like to take Tamang’s job.
Every week, Tamang treks the distance to the border and back.For his efforts, Tamang makes just Rs 13,000 a month, another reason why the postal department has struggled to find a successor for the ageing man.
But who does the unique mail exchange benefit? Mostly Tibetan refugees and people in the border villages write to their families across the border, says an official at the army’s 77 Field Post Office at Tadong in Gangtok.
Mails for Tibet are directed to the India Post’s Siliguri office, from where the letters are sent to the army’s 77 Field post office at Tadong, he says.
“The mail, mostly letters are vetted and then sealed in a bag and a manifest issued for the Chinese post office at Yathung in Tibet’s Chumbi Valley is sent to the India Post’s Gangtok head office, from where the sealed bag is collected by the Sherathang postman.”
“While the mail exchange on the Indian side of the border takes place every Sunday, the exchange on the Chinese side takes place every Thursday.”
An army officer says the volume of mail has decreased over the years and at times, only an empty bag is exchanged. “But the process is never stopped,” adds the officer.
In the age of e-mails, had it not been for the mail exchange, letters would take months to reach their destination on both sides, says Laga Tamang, Sherathang post office in-charge who also fills in for Bhim Bahadur when he is indisposed.
“Come hail or snow, Bhim Bahadur trudges up the 7km stretch from the Sherathang to Nathula to exchange the mailbag,” he says.
//copy//
Posted by SREEDHARASWAMY at 19:49