Recommendations of 7th CPC on benchmark for the purpose of MACPS: AIRF writes to Railway Board on clarification

Sub: Recommendations of 7th CPC on benchmark for the purpose of MACPS – Clarification reg.

This issue has been discussed with you on several occasions individually as well as jointly, where I mentioned that, the Cabinet Secretary has agreed to us that, the Railways being working under different working conditions, and for operation of the trains, a flow process system is in vogue, that is the reason, in the selections for various posts and categories; benchmarking system had been introduced after VI CPC when DoP&T issued instructions that, financial upgradation under MACPS should be based on “Very Good” benchmark. Even DoP&T agreed that the same benchmark should be used for MACPS which is in vogue for selection in case of the Railway employees.

Now, it is a matter of utter surprise that, on the reference as well as reply from the DoP&T, the Railways had issued instructions for “Very Good” benchmark for financial upgradation under MACPS. This issue is very sensitive and will definitely create lots of agitations because, in the MACPS benchmark of “Very Good” will be considered for consecutive three years. In most of the cases employees will be deprived of from MACPS. Since Railways are working in a flow process system, wherein, instead of individual contribution, joint contribution of the employees has their weightage.
We sincerely hope that, you will kindly intervene in the matter and as has been advised by the Cabinet Secretary, the same benchmark, which is prevalent for selection should be in vogue in case of MACPS also.
With Kind regards! 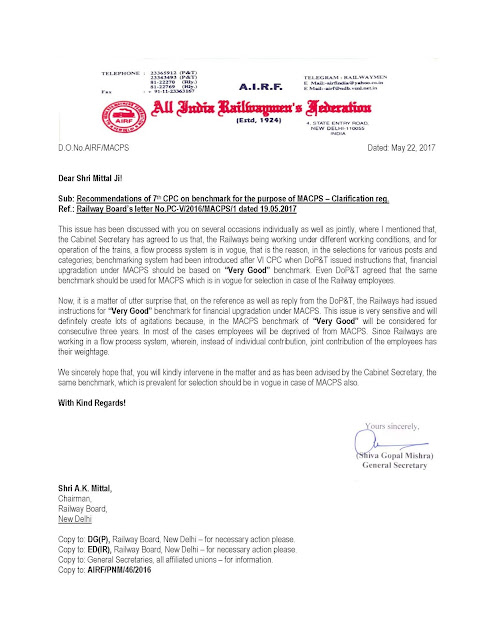